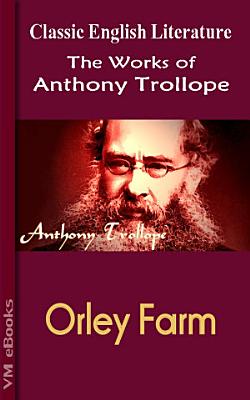 THE COMMENCEMENT OF THE GREAT ORLEY FARM CASE. It is not true that a rose by any other name will smell as sweet. Were it true, I should call this story "The Great Orley Farm Case." But who would ask for the ninth number of a serial work burthened with so very uncouth an appellation? Thence, and therefore,—Orley Farm. I say so much at commencing in order that I may have an opportunity of explaining that this book of mine will not be devoted in any special way to rural delights. The name might lead to the idea that new precepts were to be given, in the pleasant guise of a novel, as to cream-cheeses, pigs with small bones, wheat sown in drills, or artificial manure. No such aspirations are mine. I make no attempts in that line, and declare at once that agriculturists will gain nothing from my present performance. Orley Farm, my readers, will be our scene during a portion of our present sojourn together, but the name has been chosen as having been intimately connected with certain legal questions which made a considerable stir in our courts of law. It was twenty years before the date at which this story will be supposed to commence that the name of Orley Farm first became known to the wearers of the long robe. At that time had died an old gentleman, Sir Joseph Mason, who left behind him a landed estate in Yorkshire of considerable extent and value. This he bequeathed, in a proper way, to his eldest son, the Joseph Mason, Esq., of our date. Sir Joseph had been a London merchant; had made his own money, having commenced the world, no doubt, with half a crown; had become, in turn, alderman, mayor, and knight; and in the fulness of time was gathered to his fathers. He had purchased this estate in Yorkshire late in life—we may as well become acquainted with the name, Groby Park—and his eldest son had lived there with such enjoyment of the privileges of an English country gentleman as he had been able to master for himself. Sir Joseph had also had three daughters, full sisters of Joseph of Groby, whom he endowed sufficiently and gave over to three respective loving husbands. And then shortly before his death, three years or so, Sir Joseph had married a second wife, a lady forty-five years his junior, and by her he also left one son, an infant only two years old when he died.

Authors: Anthony Trollope
Categories: Literary Collections
THE COMMENCEMENT OF THE GREAT ORLEY FARM CASE. It is not true that a rose by any other name will smell as sweet. Were it true, I should call this story "The Gre

On Style in Victorian Fiction

Authors: Daniel Tyler
Categories: Literary Criticism
Some writers of the Victorian period, as well as more recent critics, have argued that the prose style of Victorian fiction aims to efface itself or that an abs

Millais Illustrations. A collection of drawings on wood

Authors: Winifred Gregory Gerould
Categories: Literary Criticism
Trollope fans and all who want to increase their knowledge of that great Victorian novelist will welcome this guide to the worlds he created. In alphabetical en