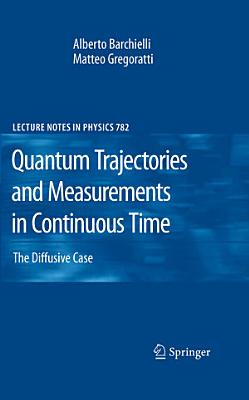 This course-based monograph introduces the reader to the theory of continuous measurements in quantum mechanics and provides some benchmark applications. The approach chosen, quantum trajectory theory, is based on the stochastic Schrödinger and master equations, which determine the evolution of the a-posteriori state of a continuously observed quantum system and give the distribution of the measurement output. The present introduction is restricted to finite-dimensional quantum systems and diffusive outputs. Two appendices introduce the tools of probability theory and quantum measurement theory which are needed for the theoretical developments in the first part of the book. First, the basic equations of quantum trajectory theory are introduced, with all their mathematical properties, starting from the existence and uniqueness of their solutions. This makes the text also suitable for other applications of the same stochastic differential equations in different fields such as simulations of master equations or dynamical reduction theories. In the next step the equivalence between the stochastic approach and the theory of continuous measurements is demonstrated. To conclude the theoretical exposition, the properties of the output of the continuous measurement are analyzed in detail. This is a stochastic process with its own distribution, and the reader will learn how to compute physical quantities such as its moments and its spectrum. In particular this last concept is introduced with clear and explicit reference to the measurement process. The two-level atom is used as the basic prototype to illustrate the theory in a concrete application. Quantum phenomena appearing in the spectrum of the fluorescence light, such as Mollow’s triplet structure, squeezing of the fluorescence light, and the linewidth narrowing, are presented. Last but not least, the theory of quantum continuous measurements is the natural starting point to develop a feedback control theory in continuous time for quantum systems. The two-level atom is again used to introduce and study an example of feedback based on the observed output.

Authors: Alberto Barchielli
Categories: Mathematics
This course-based monograph introduces the reader to the theory of continuous measurements in quantum mechanics and provides some benchmark applications. The ap

Authors: Pratim Kumar Chattaraj
Categories: Science
The application of quantum mechanics to many-particle systems has been an active area of research in recent years as researchers have looked for ways to tackle

Authors: Linda Ardito
Categories: Art
Every human sense becomes the basis of a sensuous trajectory that emanates from the body. In this book, noted authors, scholars and artists take up a wide range

Authors: Hansjörg Dilger
Categories: Religion
The contributors to Affective Trajectories examine the mutual and highly complex entwinements between religion and affect in urban Africa in the early twenty-fi

Authors: Paola Sztajn
Categories: Education
Designed to strengthen the teaching of mathematics in the elementary grades, this book focuses on helping teachers engage in instruction based on learning traje

Authors: Douglas H. Clements
Categories: Education
The purpose of this special issue is to present several research perspectives on learning trajectories with the intention of encouraging the broader community t