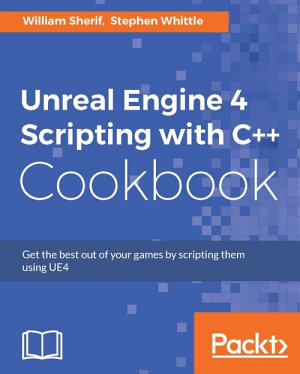 Get the best out of your games by scripting them using UE4 About This Book A straightforward and easy-to-follow format A selection of the most important tasks and problems Carefully organized instructions to solve problems efficiently Clear explanations of what you did Solutions that can be applied to solve real-world problems Who This Book Is For This book is intended for game developers who understand the fundamentals of game design and C++ and would like to incorporate native code into the games they make with Unreal. They will be programmers who want to extend the engine, or implement systems and Actors that allow designers control and flexibility when building levels. What You Will Learn Build function libraries (Blueprints) containing reusable code to reduce upkeep Move low-level functions from Blueprint into C++ to improve performance Abstract away complex implementation details to simplify designer workflows Incorporate existing libraries into your game to add extra functionality such as hardware integration Implement AI tasks and behaviors in Blueprints and C++ Generate data to control the appearance and content of UI elements In Detail Unreal Engine 4 (UE4) is a complete suite of game development tools made by game developers, for game developers. With more than 100 practical recipes, this book is a guide showcasing techniques to use the power of C++ scripting while developing games with UE4. It will start with adding and editing C++ classes from within the Unreal Editor. It will delve into one of Unreal's primary strengths, the ability for designers to customize programmer-developed actors and components. It will help you understand the benefits of when and how to use C++ as the scripting tool. With a blend of task-oriented recipes, this book will provide actionable information about scripting games with UE4, and manipulating the game and the development environment using C++. Towards the end of the book, you will be empowered to become a top-notch developer with Unreal Engine 4 using C++ as the scripting language. Style and approach A recipe based practical guide to show you how you can leverage C++ to manipulate and change your game behavior and game design using Unreal Engine 4.