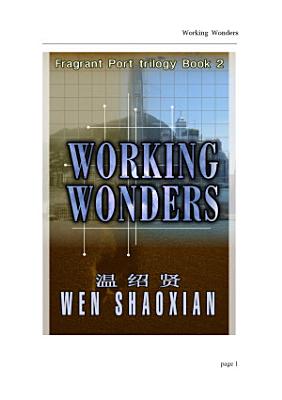 Working Wonders, the second book of Fragrant Port trilogy, tells of the story of how some orphans, survivors of the World War II, overcome all kinds of difficulties and hardships and succeed in initiating their business undertakings in post-War times. Swan Ko, grandson of Third Sister, Brown’s former amah, becomes an orphan after the War. He starts from working as a child laborer. Then he cooperates with a HK British company and invents the multi-layer contractor system, which lays down the foundation of the building industry of Hong Kong at the beginning of the 1960s when it begins to vigorously develop. Swan’s ambition is to surpass the Hong Kong British firms financially in order to bring credit to the Hong Kong Chinese. During the revolt of the Leftists in 1967, he employs the tactics of ‘buying in while others deserting’ and buys in large quantities of land and premises at low prices. During the very flourishing stock market period in 1972-73, he issues new stocks for a number of times to raise sufficient funds so that his company can develop by leaps and bounds. During the serious stock disaster in 1974-75, he continues to buy in large amounts of land for building and old buildings at low prices. After having accumulated strength silently and secretly for about 20 years in this way, he finally defeats Hong Kong Real Estate Co., Ltd., the number one century-old HK British land developing company, winning the bid for the right to develop the upper roof of the Grand Wharf in Central. This brilliant feat amazes the public and he is thus well-known overnight. On the other hand, Brown’s Watton & Co., Ltd. merges with Whymper Docks after having undergone radical ups and downs in the political and economic crises during this period. The merger company, however, is still unable to extricate itself from financial difficulties. With the assistance of Lora, his wife, Swan succeeds in purchasing the firm. Swan becomes the first Hong Kong Chinese who takes over a traditional Hong Kong British big firm. Thus, the traditional Hong Kong British companies’ monopoly of the economy of Hong Kong for more than a century is broken. Swan’s love experience is also varied with twists and turns. Lydia Lee, a half-breed, Swan’s primary schoolmate, close partner in initiating their undertakings and girlfriend, suddenly turns out to be his elder sister of the same father with different mothers, while Lora Hocking, who has one-sided love for him secretly, is discovered to be Lydia’s younger sister of the same mother with different fathers. She is found to be the illegitimate daughter of Mark Cooper, taipan of Whymyer Docks. As a matter of fact, these relations are fabricated by some people designed to cover up a past tragedy created by the older generations. The background time of the novel is set from the conclusion of World War II in 1945 to 1982, some time before the British and Chinese governments began talks on the future of Hong Kong. During this period there were the Korean War and US embargo on China in early 1950s, the revolt of the Leftists in 1967, the serious stock disaster in 1974-75, the world petroleum crises in 1974-75, and the world shipping industry crises in early 1980s.

Authors: Wen Shaoxian
Categories: Fiction
Working Wonders, the second book of Fragrant Port trilogy, tells of the story of how some orphans, survivors of the World War II, overcome all kinds of difficul

Authors: John E. Upledger
Categories: Health & Fitness
In this extensive collection, 145 practitioners from around the world tell how CranioSacral Therapy, a method of using gentle pressure to evaluate and improve t

Authors: Ryszard Praszkier
Categories: Business & Economics
Praszkier addresses the question of why some people perceive certain challenges as doable, when others (the majority) see them as impossible. He introduces prof

Authors: Sylvia Wetzel
Categories: Religion
Words can work wonders – and disasters. Words will work wonders if we are speaking with both heart and mind. With heart I mean a deep feeling of connection wi

Authors: Byron L. Sherwin
Categories: Religion
Why do people follow a leader, particularly a religious leader? And why, given that Americans are still an overwhelmingly religious people, is the clergy declin

Authors: W. David Nelson
Categories: Religion
The Mekhilta de-Rabbi Shimon bar Yohai is a collection of classical midrashic interpretation of the biblical Book of Exodus. Lost for centuries, the text was re

Tapping into the Power of Biblical Meditation

Authors: Essie Crockom Roberts
Categories: Religion
Reading Yonder Wonders will help you polish your life with the newness and freshness of the Holy Spirit within you. This book was written under the leadership a

Authors: Jennifer Eyl
Categories: Religion
In much of the scholarship on Paul, activities such as speaking in tongues, prophecy, and miracle healings are either ignored or treated as singular occurrences

Authors: Laura DeCarlo
Categories: Business & Economics
Polish up that old resume—and land your dream job We've all been there: it's time to apply for a job or internship and you have to create or revise your resum